As a Triple J listener growing up in Tamworth, you tend to resent the Country Music Festival. But over the past few years I’ve learned to love the festival I grew up with, and look forward to it every year. The hats, heat, and hillbillies all add to the appeal, and this year was no exception, especially with the luxury of being there the entire time.

Our festival began with a day at Chaffey Dam with Loz’s family, a boat, and a doughnut. Not the delicious hot cinnamons from Puffin Fresh, but the type you tow behind a boat, just as good. Between us we had a setup royals would be proud of, except when the wind gusts arrived and assumed they could literally rip the shade (marquees) away from us.

I didn’t count, but there were a thousand kids there, and all of them had an absolute banger of a day. Us big kids also had a ripper, so much so that I reckon I ripped the muscles right off my ribs trying to pull myself up on the knee-board, an injury I’m still paying for.

When we want to sound like spoilt Sydney snobs, we like to think of Murandi (Loz’s brother’s farm) as our ‘country chateau’ in Quirindi. It’s a beautiful farm on the edge of town, where the stars shine brighter than freshly minted coins, yet the nights are actually dark; unintruded by streetlights, pubs, and parades.

We parked up in our favourite part of the property, on the hill with the best view, far enough away that you couldn’t run a power cable to. The place was full of family, who all opted for more practical sites near the house. No that’s not for the Wombats, we like a challenge. Plus, being so far from the house means we’re away from all the action and drama, right? Wrong…

We woke in the wee hours of the morn, to the surprising sound of gunshots. What the hell?! Where have we parked? Is this Quirindi or The Gaza Strip? What could possibly be happening at our country chateau?

Turns out, a few weeks earlier, Muz, Loz’s brother, had some stock drowned by a few nasty predators on the property. And they were back for blood, this time targeting direct kills, straight to the jugular. Muz often comments how us city folk have no idea about what happens in the country, and until this moment he was bang on.

Laying low in the van, unsure whether we had been wrapped into the The Western Front or some sort of Inception, Loz peered through the window to find a 7-foot, half-naked cowboy with a gun and headlamp, firing past the WomBatmobile down the paddock. Muz, the man, the brother, his father alongside, spotting and shooting the pests, protecting his herd. He has the eye of a hawk and can shoot straighter than a tradie quoting those renos you’ve been dreaming about, so managed them quickly and humanely. Time for a cuppa, debrief, and some more zeds before sunrise. What a night!

The remainder of the weekend seems anticlimactic compared to the first-night fever that really was next level. But it was a wonderful time with Loz’s family, to help celebrate Hayley’s (sister) transition to late-thirties 😄. We must also give thanks to brother-in-law Elliott, handiman extrodinaire, for bringing our toilet back to life (for real, he didn’t just drop a German steamer in there).

I was recently asked what hat I was going to sport around Australia. Hat? I don’t wear hats much, and this was something I hadn’t given a lot of thought. Until our mate Kunky pointed out my beret in France and fedora in Cuba. So an akubra or corky? Tough choice.

What better place to find an Akubra than at the Country Music Festival?! Hats aplenty, more range than an American Sniper. Choosing an item to protect your noggin for a year is serious business, so with my help in-tow, we settled on the classic Dundee-style, timeless. Loz says she doesn’t like it, but deep down I know she feels safer at night knowing her husband takes pride in his sun protection.

<<<<
l Street has changed at night over the years. My memories of a buzzing atmosphere, with buskers aplenty and mutton dressed as lamb, line dancing the night away on the closed road is but a distant memory, a myth even. Given the extreme heat in Tamworth we avoided midday street visits, assuming the cooler nights would attract the fans. But wow, we went for a wander one night and not only didn't get a buzz, we didn't even feel safe. It seems night busking is a thing of the past, and the pubs are the only place to be during darkness – what a shame.

Keen to get some gigs under our collective belt, I sought advice from my trusty uncle, Mick, who was quick to recommend The Hillbilly Goats. With a name like that they must be good. They pride themselves on their Appellation Mountain genre, which is made up by a banjo, fiddle, double bass, and random percussion instruments, including a set of old bones that click together. They were phenomenal musicians, and with their brevity to wear shiny tutus wherever they go, I must give them full points.

Despite producing more water (from sweat) than Chaffey Dam’s supply to Tamworth, from the immense heat, it was a top afternoon listening to great music, spending quality time with Mick, and getting under the skin of Worldon family history and secrets.

Cover bands are always a risk. When I think country cover band I picture an early-fifties slick dude with a backing track seducing Peel Street passers-by with Khamal’s greatest hits. Despite the risks and hesitations, we decided on a Johnny Cash tribute band, who were absolutely top-shelf. Their energy was great and the singer’s voice was closer to Cash than Bitcoin is – superb.

When we visited Tamworth for the final weekend of the festival in 2017, we jumped into the Bluegrass Finals on our way home from the Cavalcade. There we fell in love with a family band from Maitland called String Loaded. Dad plays guitar, mum plays percussion, and the two daughters fiddle. So they were top of our must-see list this festival, and they delivered in spades, pumping out Celtic tune-rag after tune-rag – a band we’ll continue to chase annually.

Kanye West and Rage Against the Machine are not bands you’d normally associate with country music. This is where The Pigs have found their niche. Apparently festival favourites, we were advised they are a must-see, so with Liv in bed and pa and Aunty Kiz keeping a watchful eye, Loz and I had our date night at The Capitol Theatre, laughing our way through one of the most entertaining gigs we’ve seen. These dudes from Sydney perform endless popular covers with a country twang, and Flight if the Conchords-esq originals that would make a monk mutter a smile. They’re the sort of band we will likely see every year we’re back in town.

Back in simpler times, when DVDs and Alien Ant Farm were all the rage, dad bought a scenic chopper flight over Tamworth at a Calrossy charity event, donated by the Hodgson family of whom we are friends. For whatever reason, the years passed and dad never took the flight, and about 15 years have passed, so one would assume, just like a weekly pizza coupon, the offer had expired. But to this day, Bindy and family have insisted that the ride is still valid. So, with dad having little interest in the flight, we met up with Kirky, Oliver, Bindy, Abell, and Alfie (not Archie) at The Post Office Hotel, and after a few schooies, made our way to the touch fields for Liv’s first helicopter ride. Everyone bar Liv was slightly nervous about the increasing winds and storms surging from seemingly all directions, but it was a great experience, and didn’t take us long to spot the WomBatmobile parked outside dad’s and pool toys in the backyard. 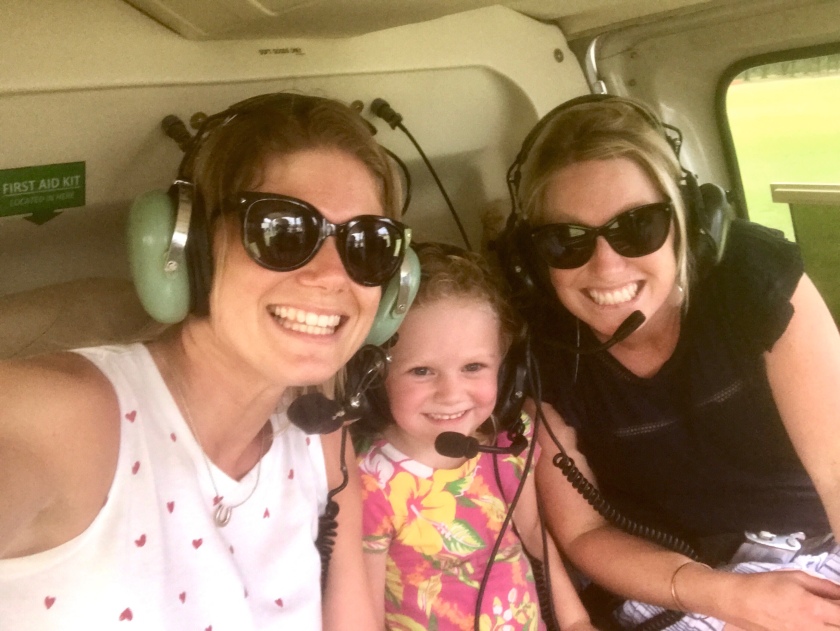 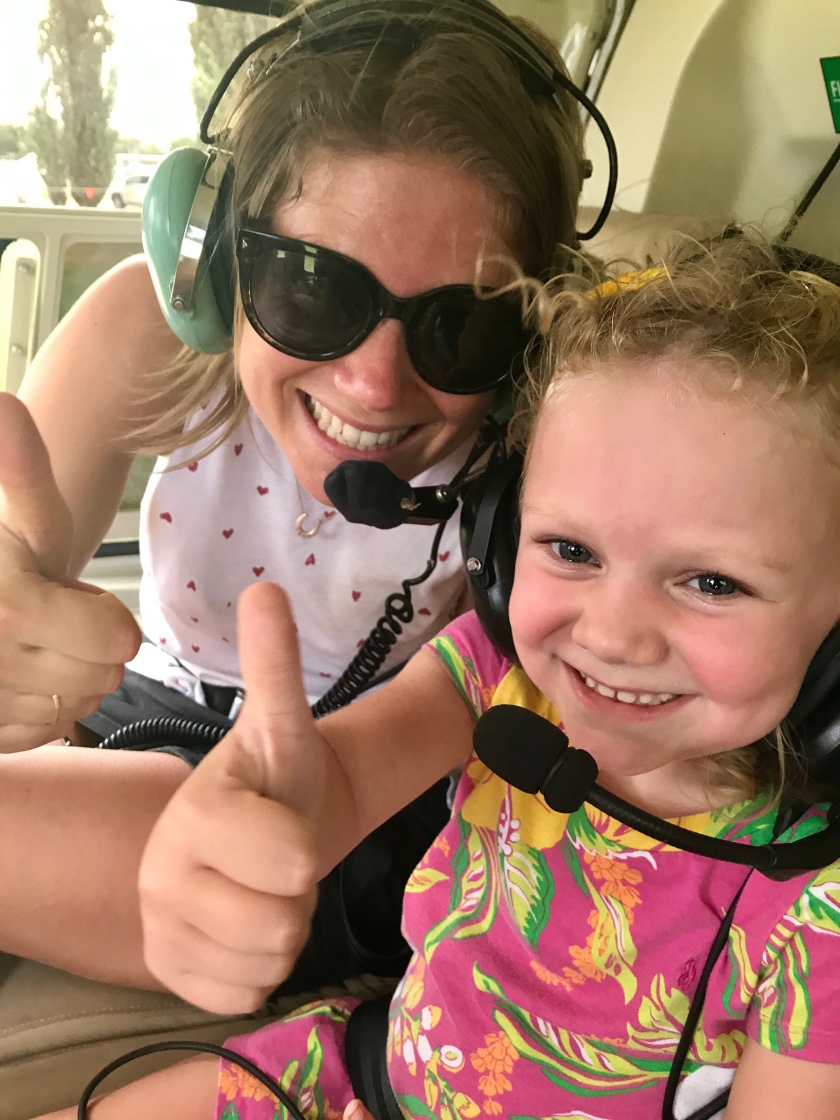 With Australia Day falling on a Friday we decided to invite friends from all over to join us for the long-weekend in Tamworth, beginning with pool and cricket at dad’s on Friday. When Triple J announced they were moving the Hottest 100 countdown to Saturday, we decided to countdown the top five songs from the past 20 years, with a handful of country bangers thrown in for good measure.

It was kid-city and great to catch up with friends before we don’t see them for a year, despite the cricket bat remaining in the bag for another day.

Our friends, Tom and Katie, invited us to their daughter, Isabella’s first birthday just up the road, of which we were excited to drop in for an hour or so.

Five hours later, we were last to leave what became a Farrer reunion, and awesome arvo in the sun drinking beers, swimming, listening to 1,000 Songs to Hear Before You Die, and watching our friend Ben’s daughter, Lexi, teach Liv how to be brave, jumping in the pool stealthil, repeatedly, with no notice.

Staying with family opens up all sorts of opportunities and favours, including babysitting 🙂. So with pa and Aunty Kiz on duty, we had another child-free night in town, this time catching up with our friends Andrew and Em, at the Busking Finals in Bicentennial Park.

Chewing on beef brisket, we bathed in a swather of varying music, most of it not country. A couple of gems came to light: the winners, the awesome Celtic band Haystack Mountain Hermits, with what seemed like more members than Arcade Fire and Slipknof combined; and 2017’s winner, Tim Scanlan, a soloist with the ‘Byron’ sound, but actually unique and good, with a backer playing the Didgebone – half didgeridoo, half trombone.

Best of all our time in Tamworth and Quirindi was being able to spend time with both our families before we go on our big ‘benture’ (Liv’s pronunciation of ‘adventure’).We made countless visits to see my grandparents, and were able to spend quality time with uncles and aunties, our siblings (minus Ash who is in London) and their families (including the youngest legend, Matty), and our parents.

It’s funny what kids find interesting and entertaining…On our final day in Tamworth, my sister, Kiz, and I took Liv to Marsupial Park, a place mum took us countless times as kids, to see peacocks, talking cockatoos, and to feed the Roos. Wanting to give Liv the same experience, we passed the cockatoo enclosure and were happily welcomed with a “Hello cocky”. Liv was suitably impressed, but happy enough to keep wandering. As we reached a few more metres she stopped suddenly, more excited than a country music mutton at the Impy on a Friday night in the early 2000s, and exclaimed, “Dad, look! Watermelon!” There was some watermelon on the ground, and apparently that is far more impressive than a bird exceeding nature’s expectations and learning a new language. Baffling stuff, really.

One thought on “Tamworth”