In golf they call them burglars. I’m not familiar with Bingo lingo, but I reckon the clickity clicks (66) or so regulars at Armidale Ex Services Memorial Club had a few mutters when Loz and Deb (Loz’s mum) wiped the Bingo floor on our arrival into Armidale. Loz claims that Bingo can only be played once retired. Our Wombatical classifies as semi-retirement, so she believes it’s fair-game. And what a shock they gave the normally sedate Monday morning affair; celebrating wins like they’ve just won the AFL Premiership. Those of you who know Loz could only imagine how this would’ve played out. At least things will return to normal for the regulars next week – but look out NSW North Coast locals, the Loz/Deb train is gathering momentum.

Loz’s original plan for this trip was to hug the coast around Australia. She is now diverting her attention to The Bingo Trail – researching the local rissoles’ Bingo schedule – at least we will be well stocked on toothpaste and laundry detergent.

The (not so) Blue Hole

Riding on the high that is a Bingo win, we took an arvo trip out towards Gara Gorge, to The Blue Hole (for the record, it’s brown, not blue). It’s a nice spot, known only to locals, and once served as hydro power for the neighbouring and once busting mining town of Hillgrove. This form of generating power has formed the basis of several subsequent discussions on the trip of renewable energy. Water flow, especially from waterfalls, provides a predictable and powerful energy source – why isn’t this harnessed better? 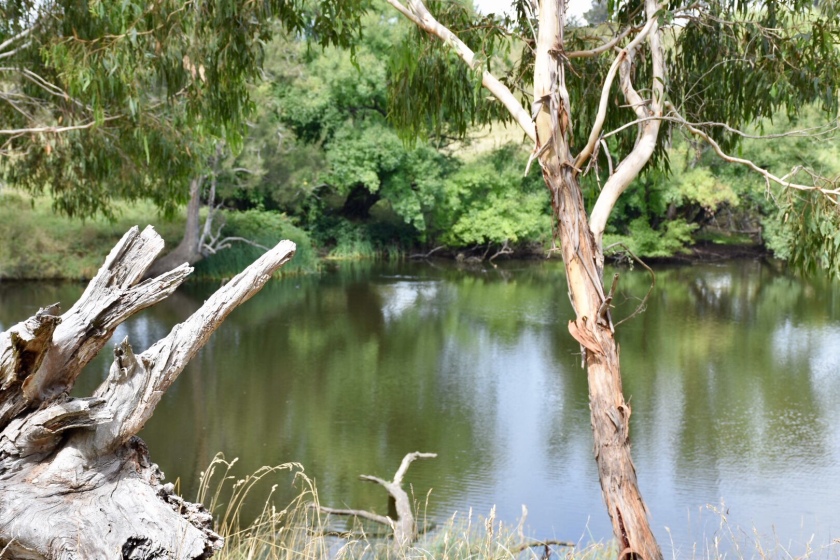 Onwards towards the coast and the first of our waterfall stops was Wollomombi Falls. They are thin, high, and impressive into the beautifully deep Wollomombi Gorge. The 3km return walk down to the river was also a worthy spot for a cuppa, something that has fast become regular routine in our semi-retirement. 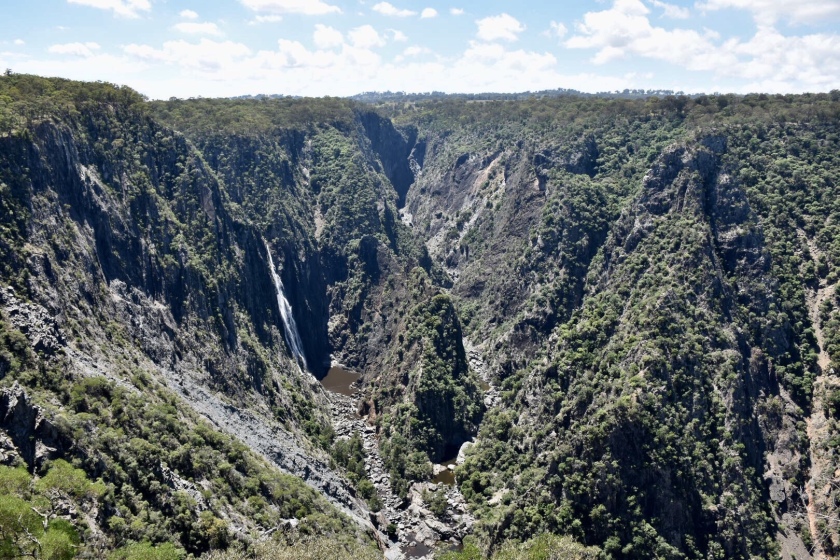 As someone growing up with little interest in farming, going to an agricultural school was always going to going to be interesting (it was actually amazing, and I do have an Akubra now, so I’ve basically never stopped being a cowboy 🤠). I remember they used to try and tag some sort of agricultural spin onto our school excursions, like visiting an abattoir in Dubbo, or some sort of farm in Roma. I’m not sure if its reality or not, but it felt like we visited a trout farm once every 10 minutes or so; so my personal excitement levels to see trout were as low as our year councillor’s voice (his nickname was Leadnuts).

Seeing Liv feeding and reacting to trout jumping around like maniacs is next level, just amazing. For a five-a we took a self-guided tour where Liv was able to send scores of fish into feeding frenzies, and had complete control, like a conductor leading her orchestra. 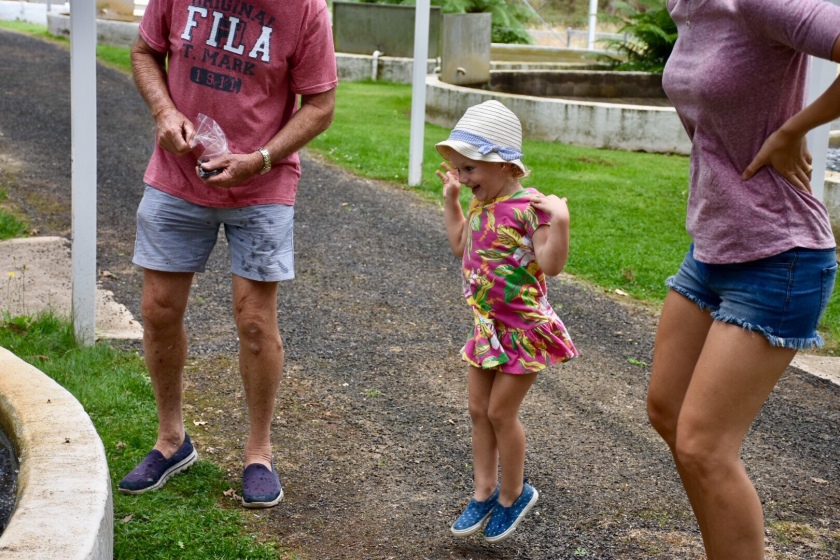 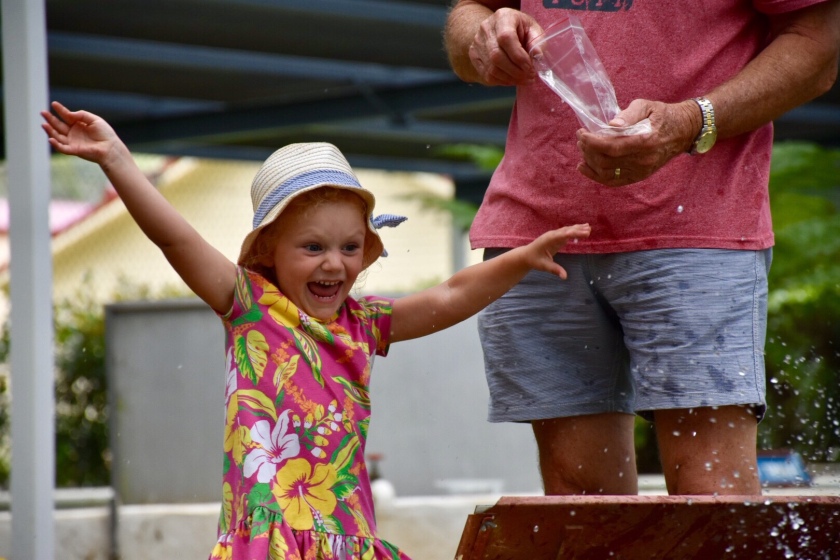 The gorge that Ebor Falls run into are a dramatic contrast from those at Wollomombi – greener than a Rastafarian’s Saturday night. It’s a beautiful gorge with beautiful falls, broken into two parts. Much wider and closer to view, these were the pick of falls to this point. 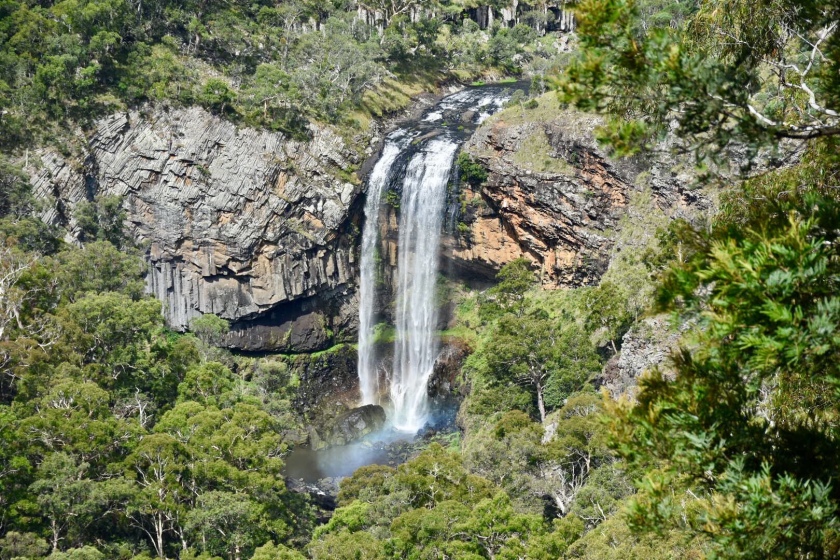 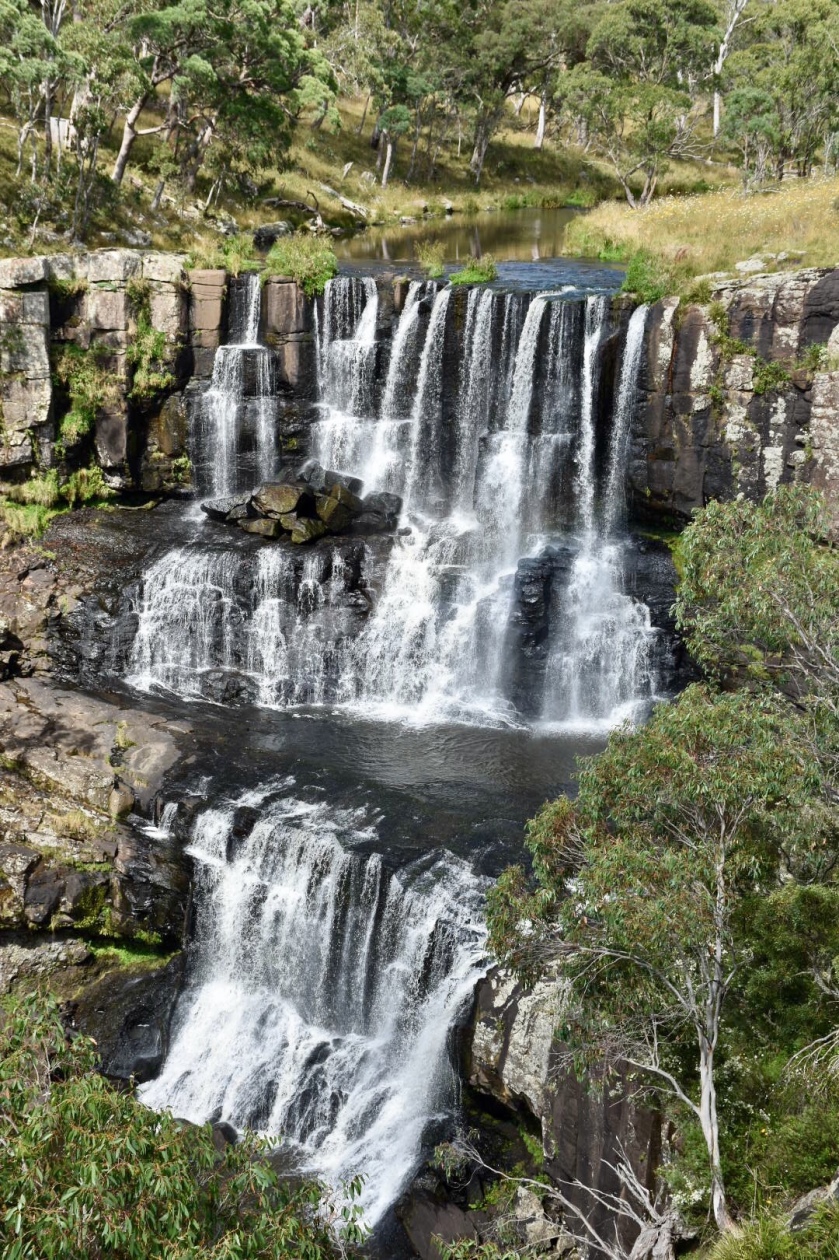 That night we found another great free-camp just off the highway, fancy enough to have a couple of aged puddles for Liv to be a kid in 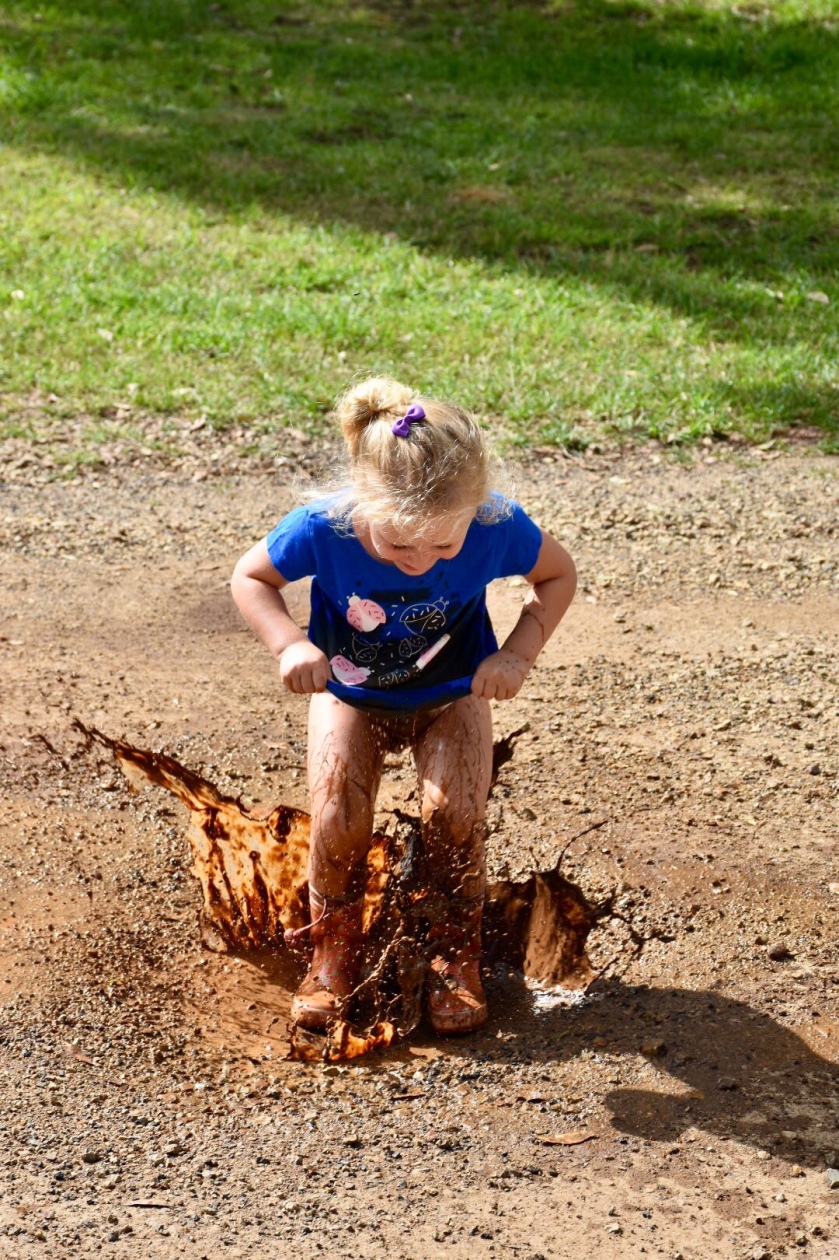 Just as impressive are Dangar Falls, just out of the wonderfully cold and green Dorrigo. What’s more you’re able to swim under them, and find a spot to sport your smugglers for a vanity shot, even with an in-vogue dad-bod. 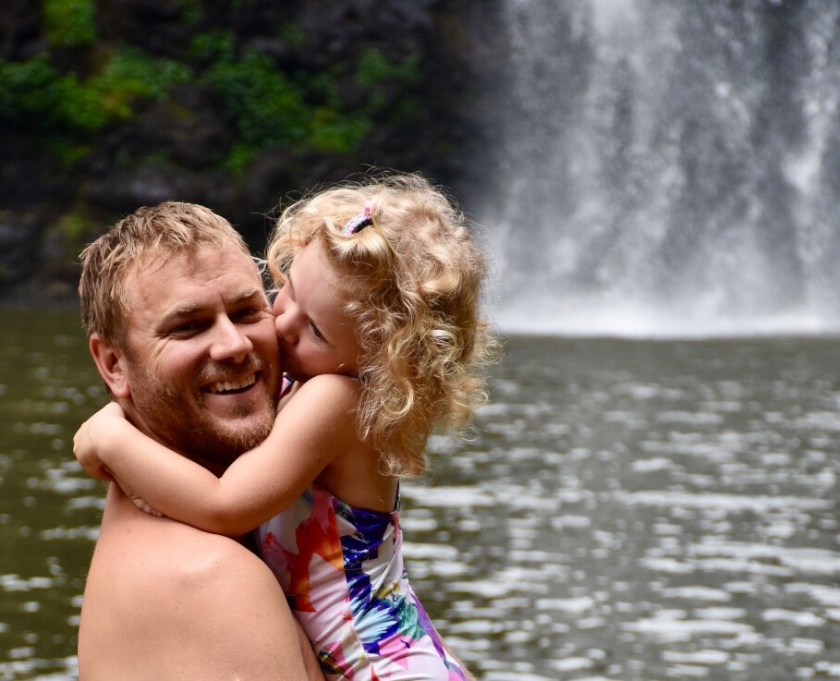 Our final fall foray was a wonderful walk into Dorrigo National Park, down to the Crystal Shower Falls. The walk itself is one of the best I’ve experienced, in the sub-tropical terrain below the gigantic green canopy, full of ferns and vines sprawling up some of the tallest trees I’ve seen. The air is thick enough to slow you down, and humidity is high enough to drink the air. The fall itself is merely an end-point; cute enough but only marginally impressive compared to the monster Falls that precede it on The Waterfall Way. 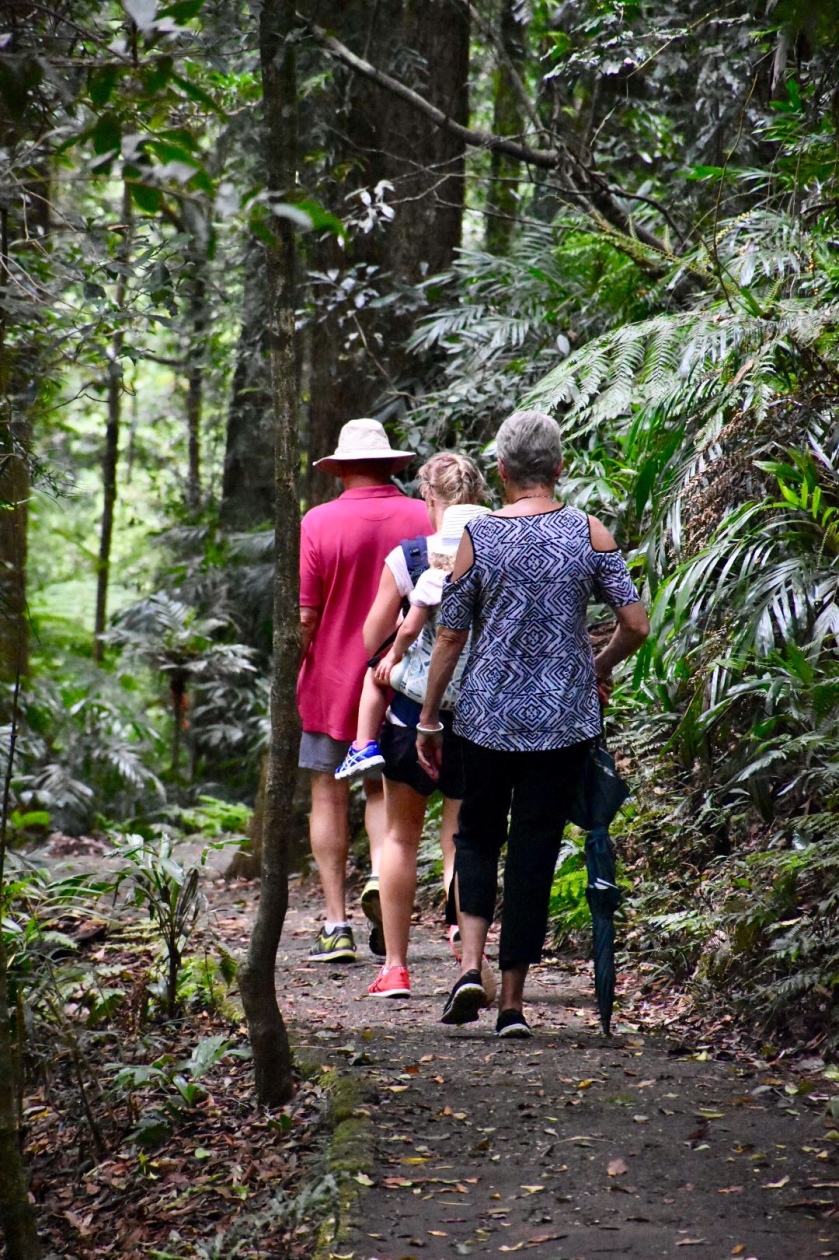 It’s been well over a decade since any of us had visited this part of the world that formed as the gateway to our school holidays to Coffs and surrounds growing up. An absolutely wonderful few days doing as TLC advised against in the early to mid nineties.