If her mum is anything to go by, Liv is going to grow up with more confidence than a seagull begging for a chip.

As soon as we arrived at the Diamond Tree, one of the monster trees available to climb in the Great Southern, Loz was out the door and making her way up the mcmassive 52m harnessless trek before I’d even locked the door.

It’s amazing, in the Nanny State that Australia is, that people are allowed to climb 52m above the forest floor, on nothing but some nails punched into the tree, surrounded by a bit of useless chicken wire that wouldn’t hold a falling chicken, let alone a Wombat full of Margaret River wine, beer and chocolate.

Loz made it to the top effortlessly, inspiring our Baby Wombat of what is possible. I wasn’t so confident, and somehow inheriting my father’s former fear of (exposed) heights, I eventually made it to the top, hanging on tighter than a random guy in Blackall tightens up a water tap. 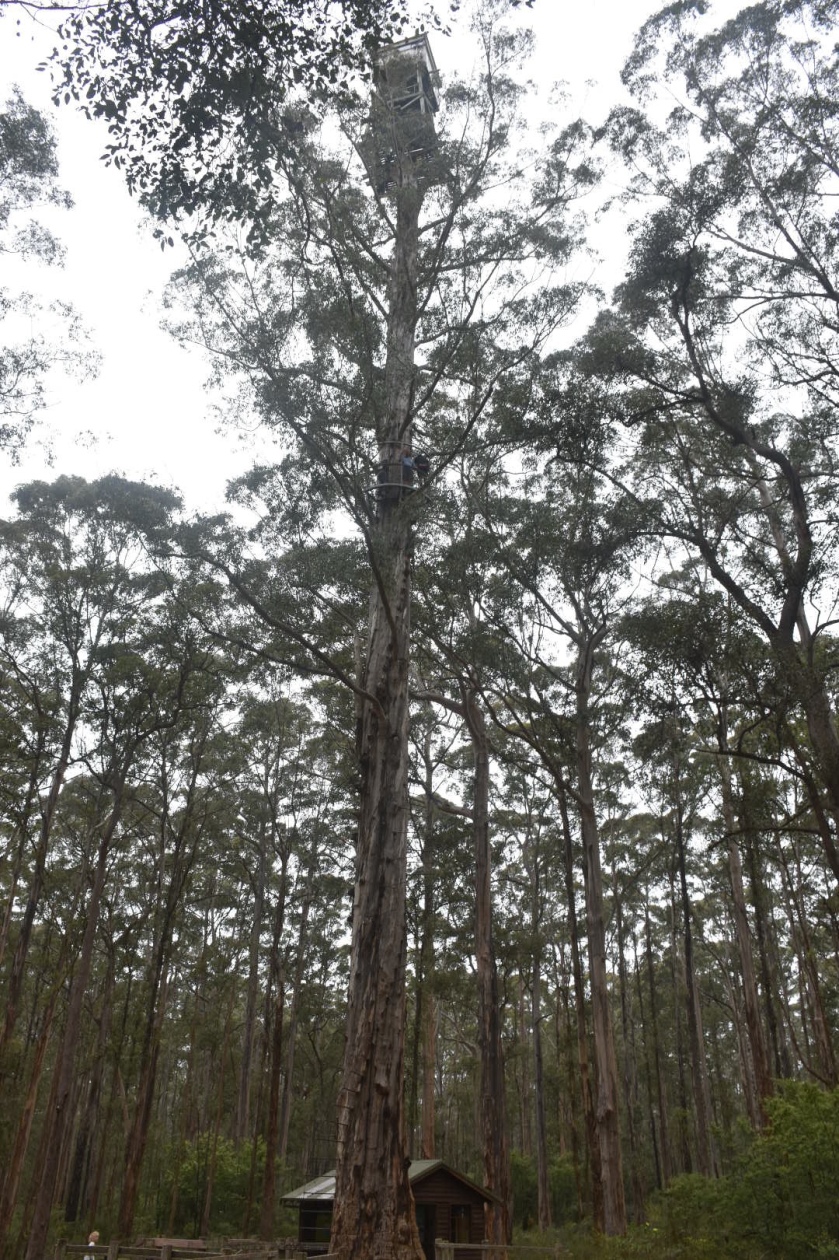 With ‘climb a big Great Southern tree’ box tickeed, we agreed we needn’t bother with the Gloucester or other big tree in the area – once you’ve done one, you’ve done them all, right? So we pushed on, towards Point d’Entrecasteaux (however you prounce that) for a magnificent view of the Southern Ocean for lunch, again spotting whales. 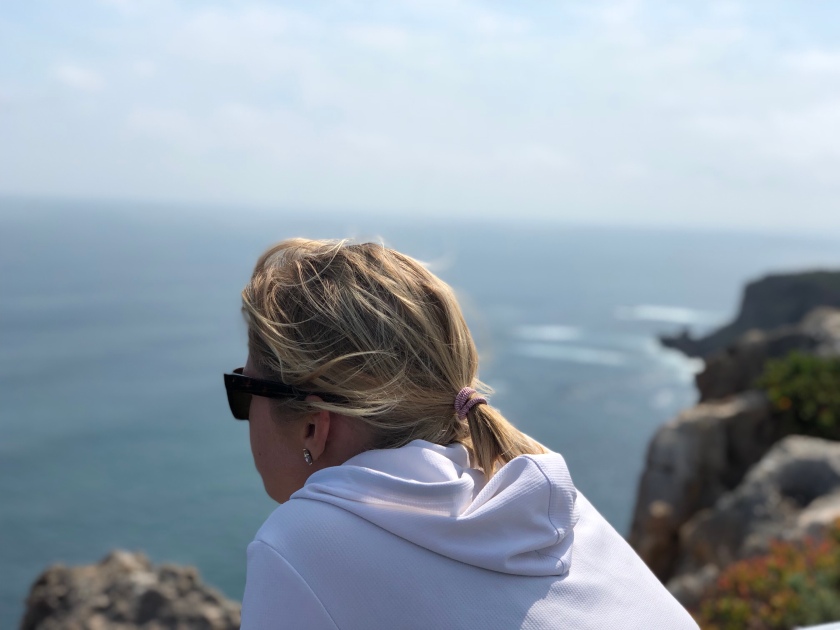 It’s funnny the things you tire of when you’re travelling, which are even more ridiculous than first-world problems like an overcooked egg or someone not using their blinker at a roundabout. We’ve seen more than a lifetime’s worth of whales on the west coast, to a point where it seems almost more difficult to miss them than spot them. Liv is well aware of this, and is done with whales. By this point at d’Entrecasteaux, with Loz and I still fascinated by these monster mammels of the sea, you could feel Liv’s patience wearing thin, “come on mum and dad, another whale?!”. I hope she reads back on this in years to come and realises that seeing this many whales is not normal :).

Only a few days or so prior to our arrival, the tiny southern town of Walpole suffered an earthquake. Despite not being on a continental shelf like many Indonedian islands, apparently they aren’t uncommon around these parts, and life goes on business as usual. I guess we’re lucky in Australia that most places are built to a standard that can handle such conditions. Thankfully we arrived and escaped unshaken.

The first thing we noticed in the Great Southern was the size and scale of trees. The forest driving is gorgous, as millions of Tingle trees line the edge of the road and disappear into the distance.

The Giant Tingle Tree, a several hundred year-old tree just out of Walpole is very impressive, with an opening wide enough at the bottom to park your car – I reckon you could almost fit the WomBatmobile in their at a stretch. Trees are difficult things to photograph to give a real understanding of scale, but most of the big Tingle trees have a circumference of 2m+, which is wider than Mason Cox is tall, and he’s the tallest person to ever play in the AFL.

It was school holidays in WA and we were amazed with the complete lack of existence everywhere. Given nearly almost all of WA’s residents live in Perth and below, we assumed this would be a popular spot for Spring holidays. But you could swing a thousands cats everywhere you went – the only risk would be the cat hitting a giant tree and coming off poorly.

The town of Walpole didn’t blow our socks off, and the sound of Peaceful Bay got us, so we decided to head out of town for the night and check out the fish and chips so highly regarded from this town made up entirely of the caravan park.

The park wasn’t anything worth raving about, but the Kingfish, chips, potato scallops and calamari from the only shop there were without question the best we’ve had in our lives. The fish was fresher than the cool Great Southern weather, and well worth the second mortgage we had to take out to purchase from this monopolising entity.

Valley of the Giants

There are a plethora of sources of information available on what to do in all parts of Australia. You can follow family blogs of travelling families, visit local visitor centres, talk to families and Stromatolites headed in the opposite direction, or in this case, read a book we gave to Liv at the beginning of the trip that highglights a handful of places for kids to visit in each state. There’s only a few spots listed in WA, which is in itself ridiculous (because WA is incredible), and Valley of the Giants is one.

The name of this place couldn’t be more appropriate – the Red Tingle trees here are absolute giants. Standing up to 75m tall and over 2m wide, you can walk through this natural wonder from ground level or 40m off the ground on a series of bridges that have been erected. So if you’re on the bridge, the top of the trees is sometimes higher than a small country town’s pool – wowsers. 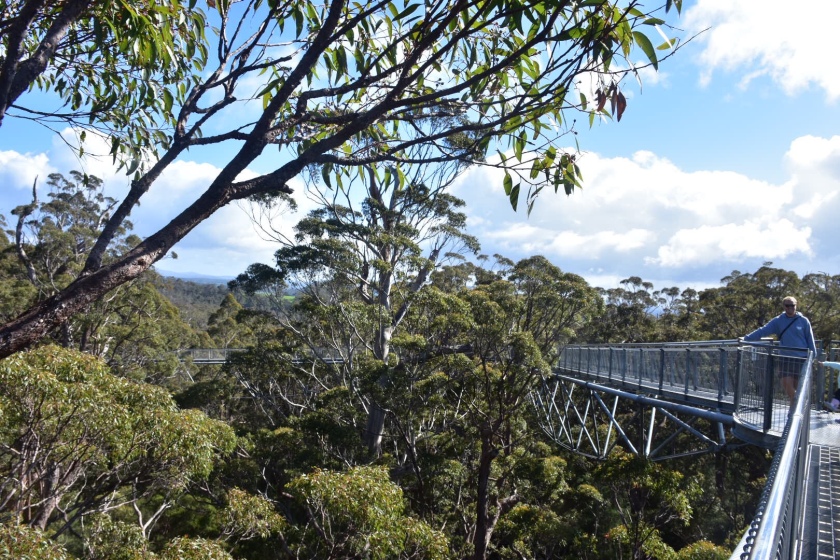 We assumed the weather in the south would be pretty miserable most of the time. So we were pretty pumped when the clouds burned away, and the winds dropped when we pulled up to Greens Pool and Elephant Rocks.

From the carpark it looks pretty wild and we thought this could’ve been a disappointment, until we migrated closer to the beach, and the bay opened up the display of rock shelf that protects these delicious beaches from the ferociousness of the Southern Ocean.

These two beaches, difficult to pick between as a favourite, quickly become some of our favourites of the trip. The water, just as all of our other favourites, was clear and calm, and the temp, despite our expectations being it would freeze us, was bearable enough for a bit of a dip. 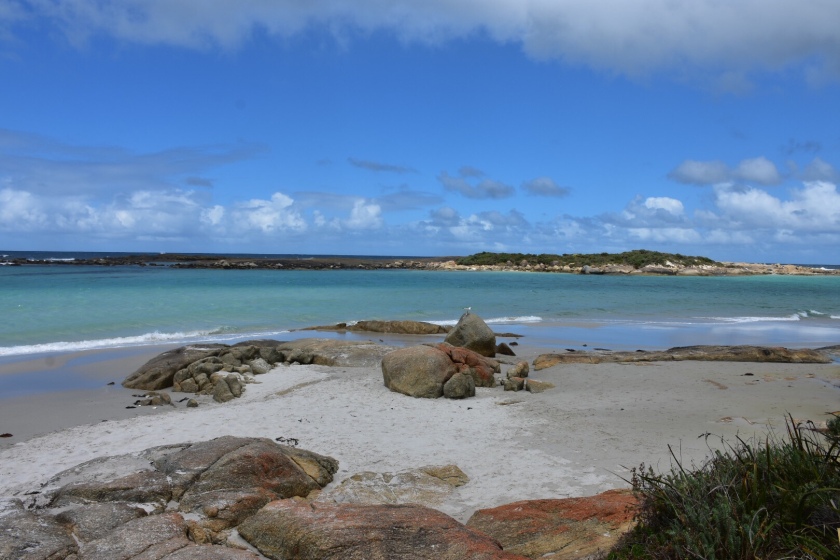 James Cole had mentioned he was pretty excited about visiting the Boston Brewing Co. just outside of Denmark. We’re super glad he mentioned it, because we would’ve driven straight past given we were pretty much breweried out (if you could believe such a thing exists) from Margaret River by this stage. It turned out to be possibly the best brewery of the trip so far, making a ripping Ginger Beer and offering a fantastic family setup with stacks of tables and chairs outside overlooking a vineyard and great kids playground.

Having been on the move for a little while without too much rest, we were more than happy to put our feet up for a couple of nights when we arrived in Albany. The BIG4 of Middleton Beach is a good one, with a hot indoor spa and good kids playground.

The weather was all over the shop, keeping us on our toes putting and pulling our clothes on/off the line as frequently as we’d pull our jumpers on and off.

Given it was school holidays, they also offered a Kids Club, which Liv was ecstatic about, with some well-earned time away from mum and dad :).

Little known to us, Australia has a rich whaling history. Up until the mid 20th century, we were knocking whales off quicker than the US were ignoring the history and beliefs of recently nominated Supreme Court judges. Hunting Humpbacks was outlawed when they were brought to the brink of extinction, leaving only Sperm Whales on the continental shelf, 70-off km south of Albany.

Given the whaling station in Albany was the only whaler in Oz (we think) to hunt Sperm Whales, meant they were the last remaining whalers in the country when Humping was outlawed.

The museum there is incredibly interesting, even for non-museum people such as us. They have restored the place admirably and the content is delivered in an interesting and engaging way. 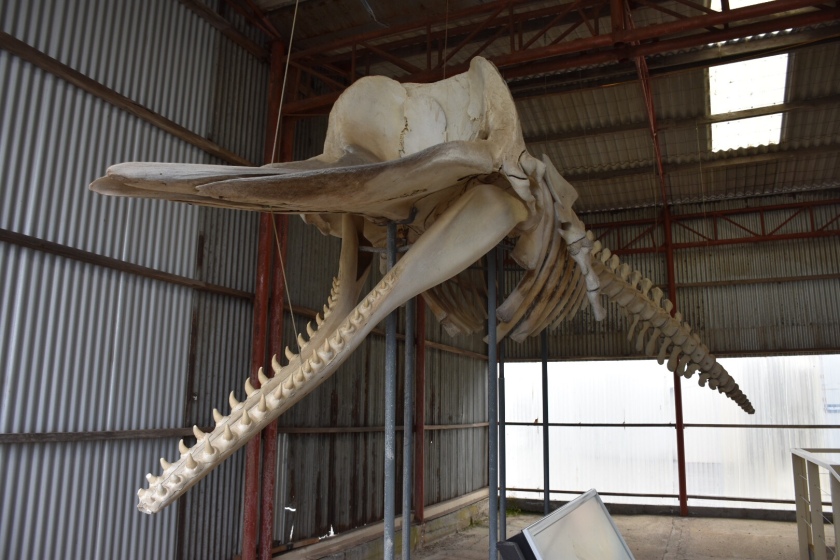 What impressed us the most was the 20m+ Blue Whale skeleton sprawling the entire length of a shed big enough to house an entire northern Stromatolite migration.

As a random bolt-on to the museum, they also have a wildlife sanctuary where you can get up and close with a host of Aussie animals, which was a good time-waster. We did see a bunch of white Big Red Kangaroos, which we haven’t encountered before, which were pretty cool.

I reckon Albany local shire thought they didn’t quite have enough reasons for people to visit the area, so they made one up. Just like Derby in The Kimberley made up the Prison Boab Tree, Albany have created The Gap and Natural Bridge.

Natural Bridge is a rock or bunch of rocks (can’t remember, that’s how unimpressive it was) form a natural bridge; one that you can’t get near let alone walk across! And The Gap is a gap in the cliffs where the fierce ocean smashes into the rocks, which is only marginally more impressive. 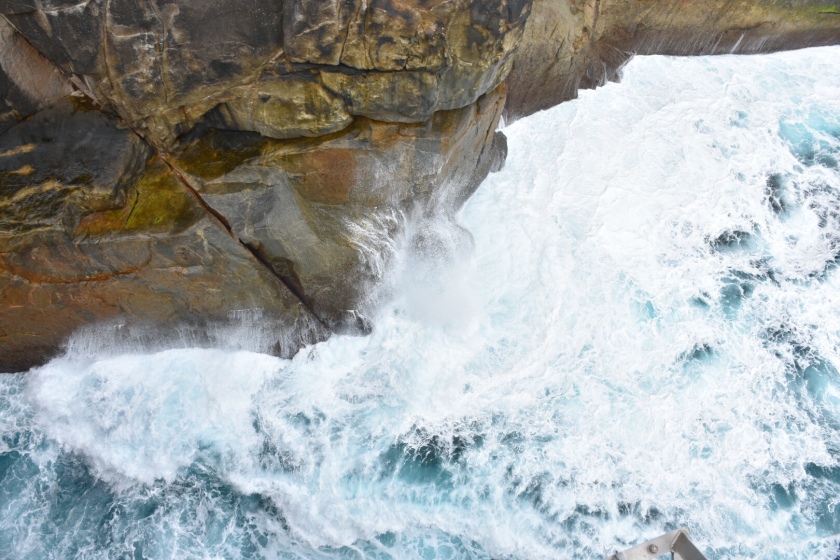 Most impressive about this place, apart from watching people take photos of plaques on their oversized iPads was the infrastructure the council has put in to make this place a ‘thing’. The pathways and railings are so over-engineered they’ll outlive 4,000 Australian prime-ministers (according to estimates, that’s about 40 years).

A bit further along the coast, off the main track a bit of a way, hidden in Two Peoples Bay is the scenic Little Beach. Although it was a pretty ordinary day weather-wise, this goes down as one of the most spectacular beaches in Australia. I reckon the sand here was as fine as a complex Margaret River Chardonnay, probably the softest and whitest we’ve set foot on. Ridiculous. 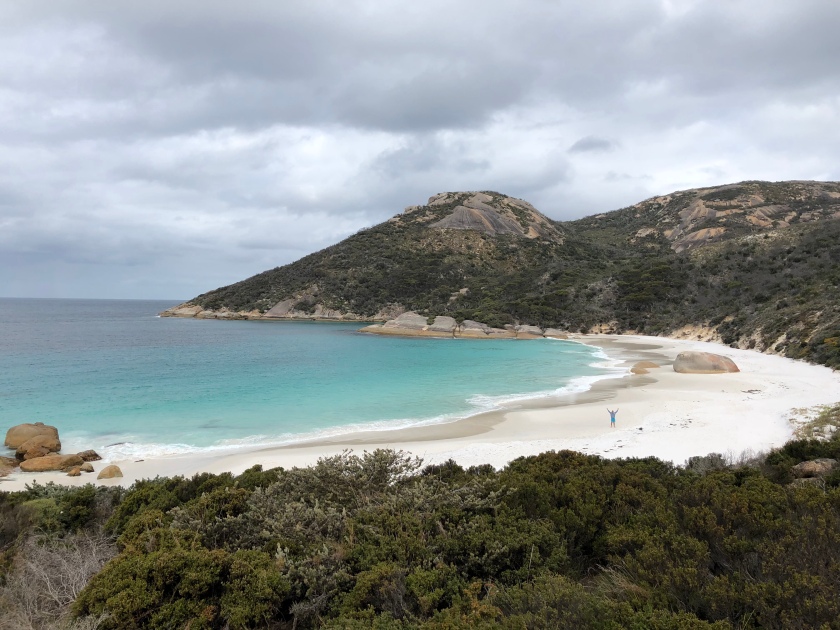 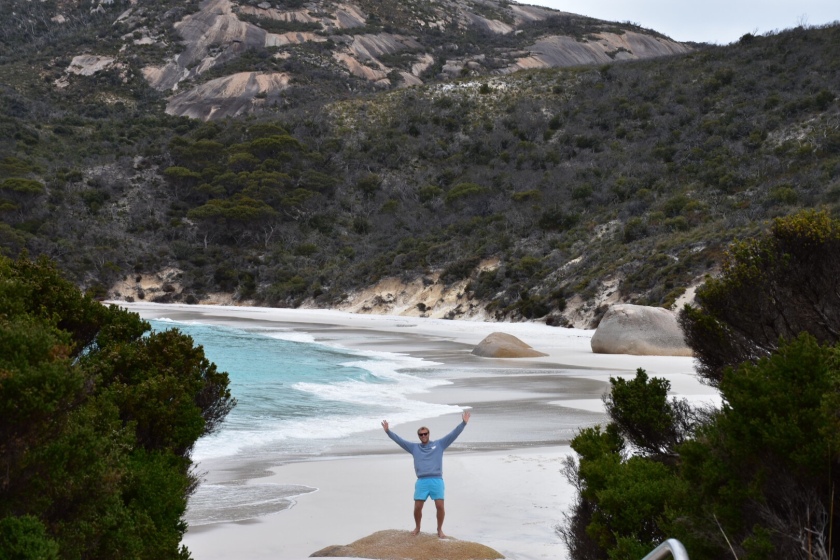 We came to the Great Southern to see the Valley of the Giants. We left impressed having experienced beaches soft enough to engulve the WomBatmobile and trees giant enough to eat it.

There was an error retrieving images from Instagram. An attempt will be remade in a few minutes.